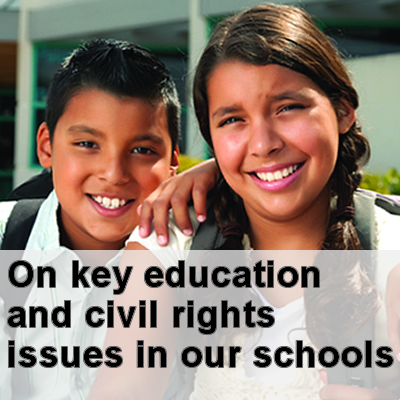 Background Information
Since 1968, the U.S. Department of Education (ED) has conducted the Civil Rights Data Collection (CRDC) to collect data on key education and civil rights issues in our nation's public schools. The collection was formerly administered as the Elementary and Secondary School Survey (E&S Survey).

The CRDC collects a variety of information including student enrollment and educational programs and services, most of which is disaggregated by race/ethnicity, sex, limited English proficiency, and disability. The CRDC is a longstanding and important aspect of the ED Office for Civil Rights (OCR) overall strategy for administering and enforcing the civil rights statutes for which it is responsible. Information collected by the CRDC is also used by other ED offices as well as policymakers and researchers outside of ED.
For further general information about the CRDC, visit the CRDC FAQ page.

In October 2017, OCR received OMB approval to require all local educational agencies (LEA) in the country, including every public school district, charter schools, juvenile justice facilities, alternative schools, and schools serving only students with disabilities, to respond to the CRDC for the 2017-18 school year. A few changes were made to the CRDC, and those changes had the net effect of reducing burden on school districts. In the 2017-18 CRDC, OCR collected data on computer science classes and school internet access, and did not collect data on high school equivalency course exam results, Advanced Placement course exam results, and student chronic absenteeism. For more details about changes in the 2017-18 CRDC, go to Questions and Answers PDF (123K).

Technical Assistance on Restraint and Seclusion

On January 17, 2019, Secretary Betsy DeVos announced the U.S. Department of Education’s (Department) initiative on the inappropriate use of restraint and seclusion, which is overseen by the Office for Civil Rights (OCR), in partnership with the Office of Special Education and Rehabilitative Services (OSERS).  As part of the initiative, OCR and other Department offices have provided restraint and seclusion technical assistance via presentations to local educational agencies and state educational agencies. The presentations include the following:

For additional information about the CRDC, please e-mail OCR at ocrdata@ed.gov.