New FY14 OSERS Grants
OSERS has announced more than $121 million in grants to help improve the outcomes of children and adults with disabilities—from cradle through career. The investments are aimed at promoting inclusion, equity and opportunity for all children and adults with disabilities to help ensure their economic self-sufficiency, independent living and full community participation.

Invitation to Comment on Implementation of Title II and Title IV of the Workforce Innovation and Opportunity Act.
In a joint blog post, OSERS and the U.S. Department of Education’s Office of Career, Technical, and Adult Education (OCTAE) invite you to submit comments and recommendations to help us implement the Workforce Innovation and Opportunity Act (WIOA), signed by President Obama on July 22, 2014.

President Obama Signs the Workforce Innovation and Opportunity Act.
The signing of the Workforce Innovation and Opportunity Act (WIOA) creates a blueprint for job growth and makes key improvements to the nation’s workforce development system. For the unemployed, the new law offers hope; for the young, it offers encouragement; and for people with disabilities, it brings opportunity. This law helps workers attain the foundation skills necessary for 21st century jobs and fosters a modern workforce that can compete in a global economy. It emphasizes the creation of career pathway programs, improved training, and streamlined service delivery to individuals—especially for underserved youth and adults.

To find out more about OSERS and WIOA:

Questions and Answers Regarding Inclusion of English Learners with Disabilities in English Language Proficiency Assessments.
This guidance document is on the inclusion of English Learners (ELs) with disabilities in English language proficiency (ELP) assessments under Titles I and III of the Elementary and Secondary Education Act of 1965, as amended (ESEA). These are assessments designed to measure the progress of ELs in attaining English language proficiency. The Office of Elementary and Secondary Education (OESE) administers the ESEA and the Office of Special Education and Rehabilitative Services (OSERS) administers Part B of the Individuals with Disabilities Education Act (IDEA). OESE and OSERS are issuing the guidance to help states and LEAs understand how Part B of the IDEA and Titles I and III of the ESEA address the inclusion of ELs with disabilities in annual state ELP assessments.

The application package is available beginning on Wednesday, July 2, 2014 and the deadline for submitting completed applications is Monday, August 18, 2014.

For further information about the proposed center, please contact:

New Accountability Framework Raises the Bar for State Special Education Programs
To improve the educational outcomes of America’s 6.5 million children and youth with disabilities, the U.S. Department of Education today announced a major shift in the way it oversees the effectiveness of states’ special education programs.

Until now, the Department’s primary focus was to determine whether states were meeting procedural requirements such as timelines for evaluations, due process hearings and transitioning children into preschool services. While these compliance indicators remain important to children and families, under the new framework known as Results-Driven Accountability (RDA), the Department will also include educational results and outcomes for students with disabilities in making each state’s annual determination under the Individuals with Disabilities Education Act (IDEA).

“Every child, regardless of income, race, background, or disability can succeed if provided the opportunity to learn,” U.S. Secretary of Education Arne Duncan said. “We know that when students with disabilities are held to high expectations and have access to the general curriculum in the regular classroom, they excel. We must be honest about student performance, so that we can give all students the supports and services they need to succeed.”

Notice of Proposed Rulemaking (NPRM) on the definition of “reservation.”
The U.S. Department of Education (Department) published an NPRM in the June 23, 2014 Federal Register requesting public comment on the actions that the Department should take to amend the definition of “reservation” under the regulations governing the American Indian Vocational Rehabilitation Services (AIVRS) program in one of two ways. The Department is requesting comment from the public on two proposed amendments:

The NPRM includes information about how to submit public comments. Responses must be received on or before Aug. 22, 2014.

The RFI includes information about how to submit public comments. Responses must be received by July 28, 2014.

Birth to 5: Watch Me Thrive! promotes early developmental and behavioral screening for kids 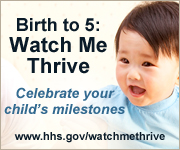 The U.S. Departments of Education and of Health and Human Services have launched Birth to 5: Watch Me Thrive! to encourage developmental and behavioral screening for children to support the families and providers who care for them. Birth to 5: Watch Me Thrive! will help families look for and celebrate milestones; promote universal screenings; identify delays as early as possible; and improve the support available to help children succeed in school and thrive alongside their peers.

John Tschida is New NIDRR Director, Effective March 3, 2014
John Tschida comes to NIDRR from the Courage Center, which recently merged with Sister Kenny Rehabilitation Institute to form the Courage Kenny Rehabilitation Institute (CKRI) in Minneapolis, Minn., where he served as vice president for public affairs and research. As a person with a spinal cord injury, he has personal as well as professional experience in issues of disability and access, and his work was deeply rooted in raising public awareness and aligning state law to support people living as independently as possible. Tschida also has served on a number of public and private boards designing policy or governance solutions to further the independence of people with disabilities, and worked closely with the Minnesota Consortium for Citizens with Disabilities. He has written numerous articles on disability, healthcare and public policy for national and local news outlets and magazines.

Mr. Tschida returns to the D.C. area, where he was a Health Policy Research Fellow under the auspices of the National Rehabilitation Hospital’s (NRH) Rehabilitation Research and Training Center on Disability and Managed Care funded by NIDRR (1997-2001). Tschida’s fellowship included acquiring his Master in Public Policy (MPP) degree in health policy at Georgetown University Graduate Program in Public Policy and doing his practicum at the NRH Research Center.